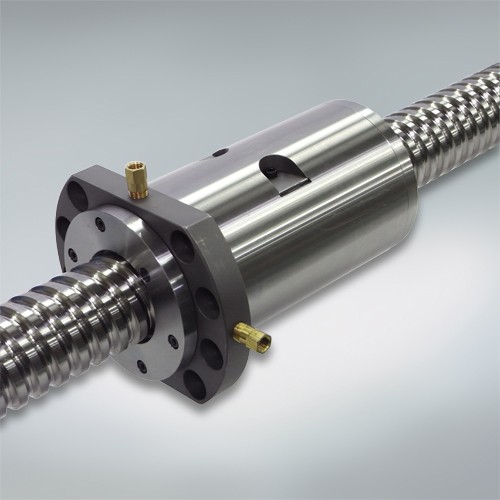 Plastic injection-moulded parts are increasingly being produced using all-electric machinery when a high level of precision is needed. This is only possible because extremely precise, high-performance, energy-efficient linear drives are available for the injection, clamping and ejector units. There is also a clear trend towards all-electric or partially electric machinery for high-speed injection moulding. NSK is playing a major role in these developments.

Leading manufacturers use ball screws from NSK in conjunction with controllable servo motors. This is because NSK examined this issue at a very early stage and developed special, high load ball screws for use in plastic processing machinery and presses.

NSK developed the first generation of high-performance ball screws which made it possible to substitute the hydraulic cylinders in injection and clamping units (which bring and hold the two halves of the tool together). Further series followed, boasting improvements such as higher dynamic capacities, increased permissible axial forces and lower total cost of ownership.

With its HTF heavy-load ball screws, NSK now markets a series that offers even greater speed and peak-load capacities. High-load ball screws from the HTF, HTF-SRC and HTF-SRD series feature an optimum relationship between the ball’s diameter and the lead. When developing this series, NSK optimised the raceway geometry of the threaded spindle and the nut, the manufacturer’s material specification and the interaction of all meshing parts (nut – ball – spindle).

Dynamic axial forces of up to 100 t can be handled per actuator with these ball screws. NSK currently supplies the HTF series for the highest-performing injection moulding machines with four spindles and a clamping force of up to 3,000 t. Especially in the European market, hybrid machines are also used in the higher-performance segment (500 t and above). These models have hydraulic clamping units but the other linear drives – e.g. for the ejector and the injection units – are realised using ball screws. Other hybrid solutions are already using ball screws as a driving element for high-tonnage clamping units.

Every detail designed for high loads

One of the HTF series’ key features is the special design of the nut, which is based primarily on an analysis of the individual ball loads and the deformation of all components located in the mechanism. NSK’s patented positioning of the ball circuits to each other successfully ensures that the balls are situated across the whole supporting circumferance for optimised balance. As a consequence, customers can benefit from the option of downsizing (using a smaller ball screw). Alternatively, they can expect a longer service life if the original dimensions are retained.

NSK has developed a patented ball guidance system specially for the high-load segment and therefore for the whole HTF series. This prevents direct ball-to-ball contact even in adverse operating environments. As a result, premature wear caused by moment and radial loads on the nuts is eliminated. Such wear would have a negative impact on the ball screw reliability in service. At the same time, S1 technology – i.e. the ball distance system – considerably reduces noise emissions.

Intensive development work on the ball recirculation system has also resulted in a higher dynamic capacity. New mouldings were developed for the ball recirculation system of the HTF-SRC and HTF-SRD series, which make the balls’ transition from the supporting area to the recirculation channel smoother by picking up the rolling elements in a tangential direction. This new development boosts the ball screw’s characteristic value Dm • n (mean ball pitch diameter x rotational speed) to 160,000. That corresponds to a traverse rate of 930 mm/s for the HTF-SRC type 63 x 25 (diameter x lead), for example. Top speeds of 1,600 mm/s can be achieved with the HTF-SRD type at a dimension of 50 x 40. The optimised geometry also reduces noise by up to 8 dB(A).

Development work on new seal concepts for linear drive systems seeks to achieve the least possible friction twinned with minimal lubricant discharge. In line with these requirements, NSK developed its A1 concept, which achieves a significant reduction in the amount of lubricant that escapes from the nut. As well as having an obvious environmental benefit, the A1 seal concept also has economic advantages as minimising discharge means that less lubricant is used. In addition to this, operating costs are lower for HTF heavy-load spindles featuring A1 seals as they have longer service and replenishing time intervals.

Manufacturers of high-quality injection moulding machines are seeing a clear trend towards electric machines. The world’s largest plastic trade show ‘K’ – which will be held in Düsseldorf in November 2010 – will emphasize this trend. There are several good reasons for this development.

Secondly, a higher degree of precision can be achieved using electrically powered injection moulding machines. This is why machines with electric clamping units are now generally used to produce extremely thin-shelled components such as light filters for mobile phones.

These – and here we come to the third advantage – are also capable of high acceleration and final speeds and thereby enable shorter cycle times.

Fourthly, these machines are more compact because they do not need any kind of hydraulic unit.

Last but not least, the operator does not need to worry about maintaining the hydraulic medium and there is no risk of leakage or fire.