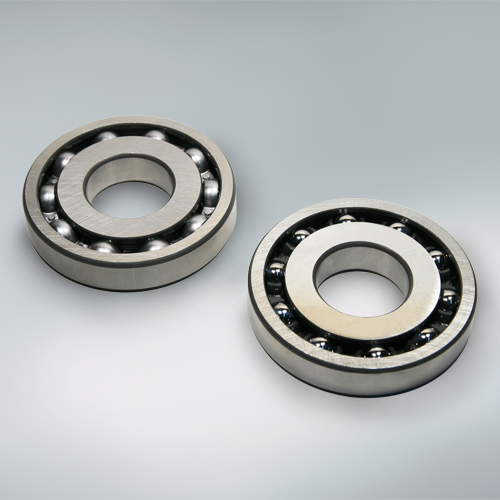 They have already proven themselves in Japan and are now set to conquer the European automotive world: we’re talking about the EQTF ball bearings that NSK has developed for the new compact, light and fuel-efficient transmission for cars. The transmission bearings last a lot longer and allow downsizing despite the higher demands.

Light, compact and low-friction transmissions are needed to help reduce fuel consumption and pollutant emissions. ‘But low-viscosity transmission oils are also being used as a consequence of this development,’ explains Michael Hackstein, Senior Project Engineer Drivetrain at NSK Deutschland GmbH in Ratingen. However, these low-viscosity oils result in thinner oil films, meaning that the surfaces of the balls and raceways are very susceptible to wear. This means correspondingly higher requirements on the ball bearings.

The development task facing NSK was thus to improve the quality and properties of the surfaces so they maintain performance longer despite the thinner oil film. The surface of the roller elements has to be kept in a perfect condition for as long as possible so as to prevent or delay ‘pitting’ of the surface of the ball bearing raceway. The particles produced by this ‘pitting’ can leaver further impressions in the raceway that lead to additional damage to the raceway and roller elements.

EQTF (Extra Quality Tough Ball Bearings For Transmissions) are bearings developed with balls made of special steel characterized by better wear protection through case hardening (carbonitriding) the surface and by adding hard silicon nitride particles within the steel. But the secret of their success does not lie in just applying the technology to existing applications. Hackstein: ‘Since the viscosity, working temperatures and speeds are significantly different, we couldn’t just offer EQTF as a new option within the catalogue. We adapt the EQTF bearings specifically to each application using our improved calculation methods together with the transmission manufacturer.’

An EQTF bearing can be used that is only half the mass, much more compact and has 12% less frictional torque due to the downsizing. Even better results can be achieved if NSK uses similarly case-hardened special steel (HTF) it has developed internally. In combination with inner and outer rings with surfaces improved through heat treatments (UR, HTF), the service life is more than ten times that of a conventional bearing. ‘The transmission manufacturer can choose a much smaller bearing for the same performance thanks to the longer life expectancy and stability,’ adds François-Xavier Caillot, Business Development Manager in the European Automotive Business Unit. ‘The EQTF technology is ideal for transmissions that are typically more compact – for example, in double-clutch transmissions.’ Hackstein: ‘The EQTF technology has already proven itself in mass production in Japan and is in its trial phase in Europe. Numerous transmission manufacturers have already ordered samples for testing.’
/content/nskcmsr/europe/en_GB/company/news-search/2015-press/eqtf-ball-bearings-light