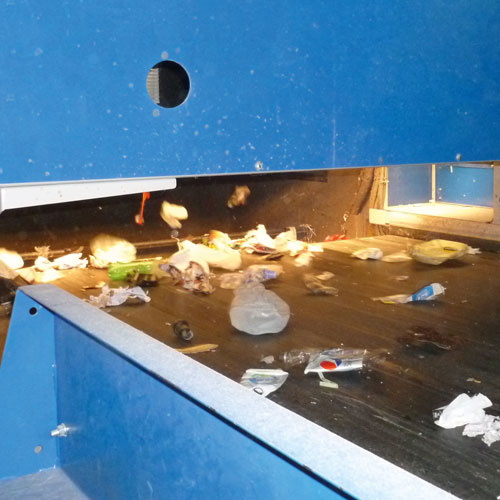 A recycling plant that was experiencing regular failures of mounted bearings on the conveyor of an optical sorting machine is enjoying major gains following the switch to NSK SNN series plummer blocks fitted with NSKHPS spherical roller bearings. Thanks to the reduction in replacement bearing costs, breakdowns and maintenance, the facility is saving €51,174 per annum.

The problem at the recycling plant came to light soon after installation. Within just three months, five bearing failures had been recorded. Keen to resolve the issue, which was proving expensive in repairs and downtime, the facility’s management team invited NSK to perform a comprehensive application review.

As part of its AIP Added Value Programme, NSK’s team of specialist engineers soon determined that vibration and lubrication issues were causing the bearing to fail prematurely. Specifically, vibration in the application was causing the grub screws to loosen, resulting in the shaft spinning in the bearing’s inner ring. It was also noted that the type of mounted unit being used had no grease escape path, leading to excessive grease build up and high heat levels.

With its modular SNN series, NSK offers plummer blocks that have been developed for use in unfavourable application conditions, such as conveyors for the recycling, quarrying, steelmaking and agriculture industries. Importantly, the components are easy to install thanks to design details like solid housing corners that provide an optimal hold for positioning pins, and a centre mark for simple alignment. Maintenance is also straightforward due the precision-engineered split housing that ensures easy bearing replacement. Re-lubrication is possible via two boreholes.

Further benefits of SNN series plummer blocks include high rigidity (to minimise deformation of the bearing seat), good heat dissipation and a comprehensive range of sealing arrangements to match all needs. In addition, the same housing can be used with double row spherical roller bearings or double row self-aligning ball bearings. Mounted units in the SNN series can be supplied for shaft diameters from 20 to 140 mm.

The NSKHPS spherical roller bearings used at the recycling plant are suitable for high speeds and loads. Available with a steel or brass cage, product features include optimum raceway design and surface finishing, as well as temperature stability up to 200°C. Importantly, NSKHPS bearings offer 25% higher dynamic load rating, up to 20% higher limiting speed and up to twice the operating life.

In combination with the SNN series plummer blocks, NSKHPS bearings have enabled the recycling plant to go from 10 breakdowns a year, to none.

Picture 1): The optical sorter conveyor at the recycling plant was suffering 10 breakdowns a year due to failed bearings

Picture 2): NSK’s SNN series plummer block is designed for use in challenging applications