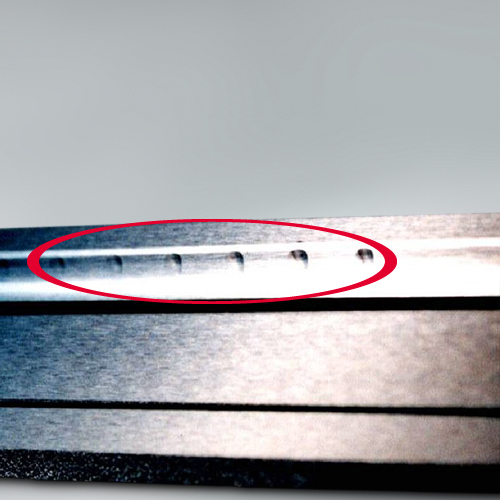 Even if the designer of a machine or plant selects linear guides with great care, they can fail prematurely or become damaged during operation. If this happens, a rapid damage analysis and swift rectification of the cause are essential. The following article describes typical damage profiles and offers guidance on choosing the ideal linear guides.

Pitting in the raceway, dents, corrosion, tribocorrosion and electrical corrosion are some typical  of damage that can occur when operating linear guides; and each type has a different cause. If a damaged profile is visible to the naked eye or a component has failed, the first step is to classify the damage so that its root cause can be identified.

Pitting in the raceway
If pitting becomes visible on the working surfaces of the rail, carriage or balls, this can be a sign that the unit is mounted incorrectly or has insufficient lubrication – assuming the linear guide has not yet reached the end of its standard service life. It is also possible that foreign bodies or water have penetrated the guide. In this case, we recommend you check the seals and/or protective caps on the linear unit. Improving the precision of the mounting and checking that the mounting surface is level may also help.

Tribocorrosion / Fretting Corrosion
During short-stroke and oscillating applications, the contact points between the balls and the raceway can repel the lubricant. Metallic contact then occurs, which leads to microscopic bonding. The next movement breaks these bonds, chipping particles out of the raceway which then corrode. Combined with the lubricant, these particles form an abrasive mix that causes even more damage. NSK recommends three main ways of counteracting this: Firstly, you should use a lubricant specifically designed for short-stroke machines. Secondly, it is prudent to run regular distribution cycles to remix the grease and the balls. Thirdly, we recommend shorter service intervals to ensure sufficient lubrication throughout its service life.

Dents
When foreign bodies such as metal particles work their way towards the contact points, they dent the raceway or the rolling element. This problem can be solved if the user of the machine prevents contamination from entering the guide unit, e.g. by improving the seal or cleaning it more regularly. Using special wipers for heavily contaminated areas will considerably extend the linear drives’ service life. Dents with the same spacing as the rolling elements are a different matter (brinelling). These are caused when linear guides are mounted incorrectly or by excessive shock loads.

Corrosion and electrical corrosion
If water, machining emulsion or other corrosive media penetrate the unit, they can cause the raceway and balls to corrode (figure 4). In this case, the lubrication and/or seal need to be improved. For example, you could use a grease with calcium soap as a thickener, since this works better than standard greases in wet environments. Electrical corrosion is a special form of corrosion which happens when electricity flows through the moving linear guide and sparks are generated on the thin oil film between the raceway and the balls. This type of damage – which happens more often than you might think – results in black, dimple-like indentations in the rail’s raceways. It goes without saying that electricity should never be conducted through a linear guide!

Damaged ball recirculation components
Broken ball recirculation components cause the balls to leave the carriage. This can be prompted by an excessive rate of feed or by the recirculating balls jamming due to a lack of lubrication or particles that have penetrated the unit. If the system in question has composite rails, the damage can also be caused by part of the ball recirculation system and/or the mounting colliding with the rail because the rails are misaligned. In this case, the unit must be mounted more precisely.
Fast troubleshooting when damage occurs
Whenever you notice damage of this kind, you can rely on the linear technology experts from NSK for support.  They offer fast troubleshooting for all customers – from machine manufacturers to users of linear drive and guide systems – along with expert advice on choosing the ideal guide unit. Special ranges are available for many operating conditions, such as very high speeds, high precision, dirt and moisture, which can help to prevent the damage described above from happening in the first place.
A practical example illustrates the approach taken by NSK’s engineers.  A woodworking company contacted NSK because the linear guide in one of its machines had a service life of just three to four weeks. An inspection of the ambient conditions and a subsequent damage analysis revealed that the lubricant used for the linear guide was being absorbed by sawdust, which was in plentiful supply in the working area.  Contaminants then found their way inside the slider and destroyed the carriage’s end caps.

Effective seal concept
NSK then recommended the V1 series of linear guides with high-performance seals to the user. These drive elements feature a special seal concept that has been optimised in terms of both the shape of the seal and the material used. The sealing lip fits tightly around the ball guide profile without a gap and is made from an extremely abrasion-resistant material. In the interests of stabilisation, the seal is vulcanised on metallic base plates. This design enables a precise distinction between repelling dirt and sealing the component. It therefore offers the best possible protection from contamination on the working surface between the guiding element and the slide.  The new V1 seal – which is always used in conjunction with the K1 lubrication unit – is particularly effective. With this system, the lubricant is incorporated into a polyolefin which releases tiny amounts of oil by capillary action when it comes into contact with the sliding surface.  This means that the linear guide runs very steadily with little friction and ensures that lubricant is   constantly supplied.

Developed for abrasive materials
The linear guides with V1 seals were originally developed for linear axles in machines that process abrasive materials such as graphite, ceramic or sintered materials.  They have proved equally effective for woodworking. In the case described above, the user was able to extend the guide’s service life to well over a year by taking NSK’s advice. The customer can now schedule servicing of the guide, unplanned downtime has been eliminated, and the system has returned to its desired level of productivity.