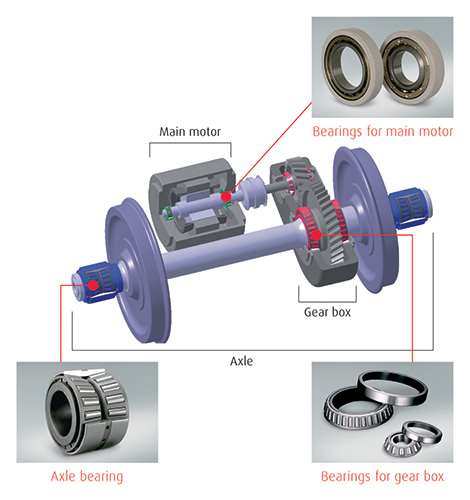 With an unwavering goal to maximise safety in high-speed rail travel, NSK can recount more than half of century of innovations that date back to the very first generation of Shinkansen bullet trains in Japan. Indeed, advanced development programmes have continued apace to the present day. This is because the latest-generation trains are getting even faster, which places yet higher demands on bearing technologies.

Here, NSK continues to work with its rail industry partners, in both the OEM and aftermarket sectors, to create products that can improve factors such as safety, performance, comfort, weight and cost-efficiency. For example, among the latest developments is a system that is able to detect bearing abnormalities during operation, thus facilitating the growing need to transition from time-based to condition-based maintenance routines.

Since the 1960s, Shinkansen bullet trains have provided Japan with the high-speed infrastructure necessary to support one of the world’s biggest and most important economies. Recent developments have seen the network extended, with the Hokuriku and Hokkaido Shinkansen lines opening in 2015 and 2016 respectively to help revitalise these regional communities. Moreover, the progress made by Japan has prompted other many countries to follow suit, all keen to capitalise on this low-carbon mode of transport.

In line with the rapid progress achieved, NSK has supported developments through constant evolution of its bearing technologies for rail industry applications. Nowhere is this more evident than for the Shinkansen trains. For instance, in 1964, when the 0 Series trains first emerged, the 81 kg axle bearings supplied by NSK featured a combination of cylindrical roller and ball bearings, primarily to deliver reliability for these 210 km/h trains. The radial load, including the weight of the rail carriage, was supported by two rows of cylindrical roller bearings, while the lateral loads, including the axial forces generated by curves, were supported by one ball bearing. This was the optimal method at the time.

Fast-forward to 300 Series trains in 1992, where NSK cylindrical bearings with ribs supported trains capable of 270 km/h, and then to the N700 Series trains unveiled in 2007, and the progress is clear to see. With even more emphasis on speed (300 km/h), lighter weight and comfort, the NSK tapered roller axle bearings for N700 trains weigh just 23 kg – an almost four-fold reduction in comparison with the axle bearings used on 0 Series trains. At high speeds, excessive bearing weight can have a strong influence on noise and vibration, hence the desire to lighten the design. 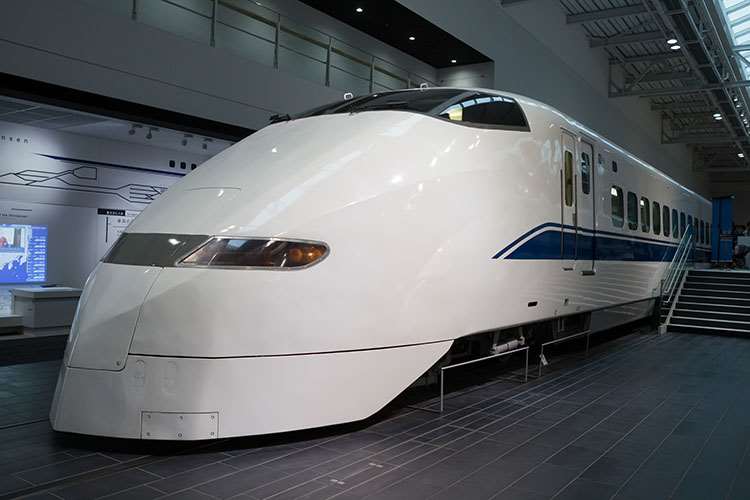 No matter how light and compact bearings become, however, safety remains the top priority. Here, NSK leverages its expertise in materials engineering to improve safety performance, a factor matched by the desire to develop bearings capable of withstanding the harshest of operating conditions.

Of course, in the interests of safety and reliability, tough environments will always necessitate effective maintenance programmes, and it is here that NSK has achieved a recent breakthrough. The company has developed the first system in Japan that is capable of detecting abnormalities in bearings, including damage, before reductions in performance or failures occur. The system has already been adopted for conventional railway lines aiming to improve customer’s safety operation and maintenance efficiency.

NSK’s system involves mounting sensors on the bearings so that parameters such as rotational speed, vibration and temperature can be closely monitored. Thanks to the company’s extensive experience, it is possible to compare the information collected with the vast quantities of reference data already gathered by
NSK.

The system will help facilitate the growing trend of replacing conventional time-based maintenance routines, where bearings are replaced at predefined periods regardless of whether they have an abnormality, to condition-based maintenance, where parts are replaced only when necessary. NSK is now expecting that the system will be adopted to more and more rail cars due to the clear advantages on higher safety and the cost saving that results from longer intervals between maintenance.

Based on such high levels of innovation, it is easy to see why NSK has the biggest market share for railcar bearings in Japan. Moreover, the company’s bearings are being selected by high-speed rail operators around the world – more than 50% of NSK railway bearing sales are today concluded outside Japan.

NSK offers technical capabilities and reliability that began with the Shinkansen 0 Series and have been continually refined for over 50 years. Leveraging these technologies and expertise as a driving force, NSK will continue to support the well-being and safety of society as a whole.